For many years, the phrase "smart watch" did not have a good reputation among the fashion aficionado. For many years, the phrase “smart watch” did not have a good reputation among the fashion aficionado. In fact, any accessory or device with a name preceded by “Smart” shared a similar fate. But things certainly have changed since the day Apple Watch appeared on the cover of Vogue China.

When I first saw Samsung Gear S a few years ago, I couldn’t imagine how it would sit on my wrist among the rest of the glamorous #armparty members – it looked quite out of place, frankly speaking. The idea of having a smart watch never really occurred to me since then. (Admittedly, I was swayed on the day Apple Watch Hermes was announced, but not too much.)

When Samsung’s PR contacted me about the newly launched Samsung Gear S3 not long ago, I hesitated at first, but then was quickly taken by surprise to see just how much Samsung Gear has evolved since the last time I saw it. Between the Frontier and the Classic model, I selected the Classic model and tried it on as soon as it arrived. The S3’s design is undeniably a significant step up from the previous S2 model. (Of course, it’s a world apart from the first generation S.)

I’m a techie by trade but a hopeless self-proclaimed aesthete by nature. In the one week I’ve spent with Samsung Gear S3 Classic, yes – the watch did all the things it’s claimed to be capable of (e.g. receiving and making calls, using various apps, showing notifications from your phone, running S-Health) but it was its look that really earned my love. I got compliments from friends on how it looks, especially after knowing that it’s a Smart Watch. 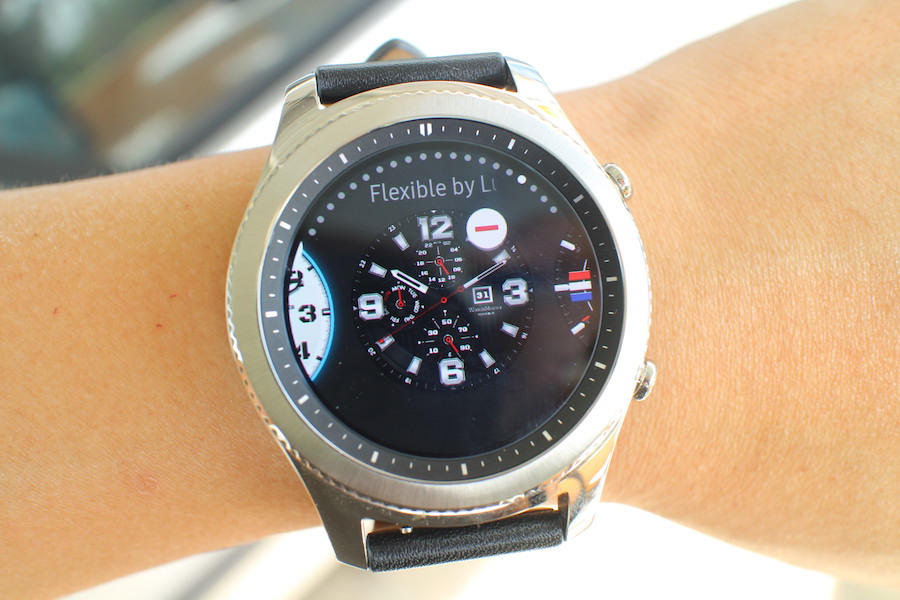 Aesthetic aside, there are a few points I’ve discovered that might interest you if you’re planning to get an S3:

S3 is quite bulky, especially on my skinny wrist. It would be great if it comes with a smaller-sized option. Here’s a size comparison with the largest Apple Watch: Changeable watch face is a common feature on most high-end smart watches today, but not all offer great selection of stylish (or non-geeky) watch faces that match the watch like S3 does.

The Use of Standard Strap

S3 uses standard strap and that is a good news for me as I can see myself purchasing third-party straps and changing them based on my outfit.

This is a clever idea and it reminds me of iPod click wheel. It’s convenient and intuitive.

Although the watch’s display is quite responsive – it woke up every time I moved or lifted my arm – I realised there were times where I wanted to glance at my watch to check time without moving my arm or twisting my wrist at all. There’s the “Always-On Display Mode” feature for this situation, but it consumes battery power. (I might be conflicting with myself here. Oh Well… Can I have the best of both world?) Is it worth getting this watch? Well, if you want a stylish smart watch that isn’t Apple Watch, then Samsung Gear S3 is a very great contender.

* The review unit was provided by Samsung